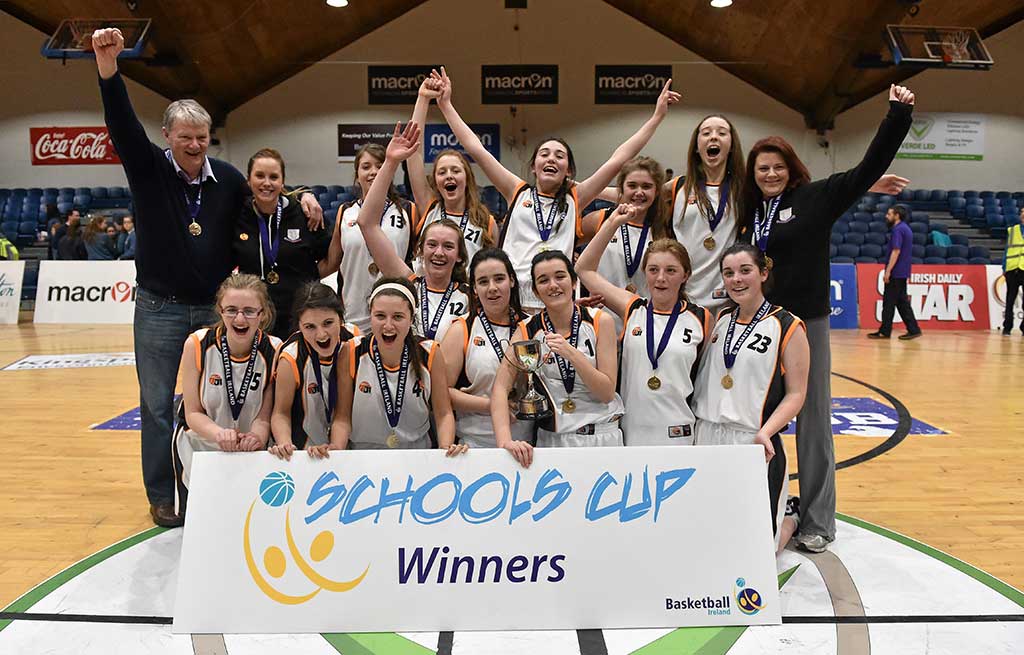 Gort Community School claimed the U16C Girls All Ireland Schools Cup in an all Connacht tie at the National Basketball Arena on 19th January 2015. St. Nathy’s College plotted their way to the final in impressive fashion but Gort had been been strong right throughout the rounds and had too much for the Ballaghaderreen side on the day.

Anna Creaton had the sides level midway through the opening quarter before Gort got their fast break up and running. It was powered by Lisa Della Chiesa’s long passing from the back court and converted by Ciara Helebert’s effortless layups. Gort were equally effective in defence. Olga Burke and Kate Tarpey worked in tandem to spread their wingspan and create a wall of white for St. Nathy’s to try and break down. Point guard Megan McCormack looked up to the task – she glided by Gort opposition to beat the press and was always looking to bring Nathy’s team mates into the game as she ran herself into the ground. Shannon Doherty never shirked an open look and had four points to her name by the final buzzer.

It was a game played in the right spirit across the quarters. When Nathy’s Anna Creaton hobbled off the court, it was Della Chiesa of Gort who ran to provide a shoulder to lean on. Nathy’s never gave up when the scoreline looked to darken their day and McCormack was taking the ball up right until the final buzzer. The crowd were supportive to both sides and occasionally to each other and the odd ‘Mexican Wave’ or ‘Poznan’ added to the colour of the day.

In truth, Gort were the worthy winners. They were disciplined and diligent in defence. They were conditioned and efficient on the fast break. And they deserved every ounce of joy they squeezed out of each other at the final buzzer.